Last post I left off with heading back to the hotel for a nap. Now it’s race recap time! I woke up from my pre-race nap to strains of “I want it that way” by the Backstreet Boys wafting in from the pool area. For a second I thought I’d gone back in time, but alas no, I’m still old. I dressed up as Facilier from Princess & The Frog: 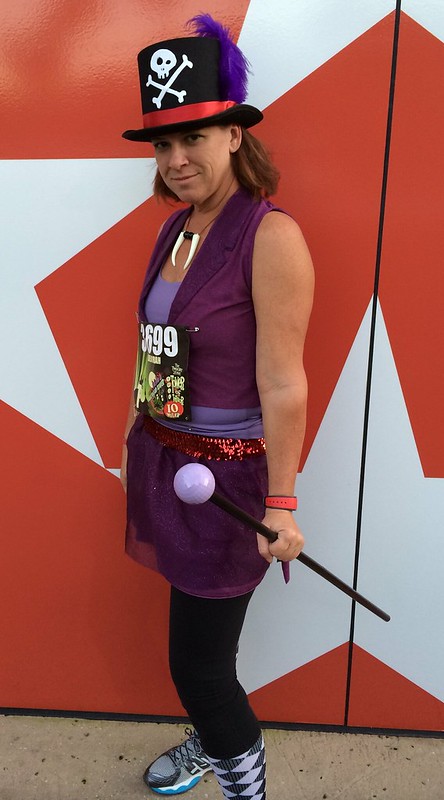 B dressed up as Maleficent (she even did makeup to get the full effect) and looked awesome. We headed out to get on the first bus leaving at 7:15. There was a group of people waiting but everyone fit on the bus with no problem. I had hit the dollar store and bought a ton of glow stuff so once we got to the start we sorted through it all and decorated ourselves accordingly. After we checked our bags I saw a group of 3 ladies, 2 adults and a kid around 12, so I offered them our extra glow items. The kid was really excited so I’m glad that I saw her before giving them to someone else.

We looked for characters to get our pictures with but didn’t see any. We did have a RunDisney photographer come up asking to take our picture and that was the one that ended up on the RunDisney Facebook page. We didn’t feel like waiting in line for the “guest book” backdrop picture since there were no characters so went to eat instead. There were about 4 food trucks at the start area. I got a margharita pizza from one of the trucks, it was pretty good and the truck even took the MagicBand as payment. Then it was a lot of sitting around by the food trucks, waiting in a long line for the porta-potties and more sitting around on the ground. They moved us to the corrals around 9pm and started walking them over to the start shortly after and well before 10. It was a good mile walk to the start but at least it was better than sitting around bored. B had moved back to join me in corral F and we started at about 10:10.

The route started right outside the Studios. We were on a road right outside the park near MuppetVision. It went down the street, under an overpass then looped around a lake to get us on the Osceola Parkway. The lake had a giant lighted eyeball in it and the overpass had a lot of projected lights. We then ran down Osceola to AK, looped around in the parking lot, then back on Osceola to Wild World of Sports. Thru a forest area running on dirt (which was surprisingly well lit) then around the fields and baseball stadium. From there we headed back to the Studios and the last mile were looping thru the park ended behind Tower of Terror.

They were characters about every mile from what I remember it was: Jafar, Hyenas from Lion King, Hook (he was on the median on Osceola so you had 2 shots at him), Facilier, Queen of Hearts, Jack & Sally, Stitch, Big Bad Wolf, Evil Queen as the Old Hag, Haunted Mansion dancers, Gravediggers, a group of random zombies and Lotso in the park.

Jafar was the first character and we stopped even though the line was a little long. Then with only 2 people in front of us he went on a break. So we had to wait while he walked slowly down to a trailer at the bottom of the embankment, then wait while Jafar 2.0 came out of the trailer and back up to the road. Easily killed 5 minutes if not more at that stop. The second was the hyenas and the line was super long so we didn’t stop since I was still worried about wasting so much time at Jafar. That one I do regret not stopping for though. We also stopped at Facilier (of course), the old hag, the wolf and two of the mile markers (the ones with Facilier and Maleficent for costume pics). We also stopped for a real bathroom at WWS and had to wait in line. Seriously, they make you wait in the corrals so long I don’t even be able to make it thru a run without stopping to pee. At least I’m hydrated! My favorite pic from the run is the one with the Old Hag. 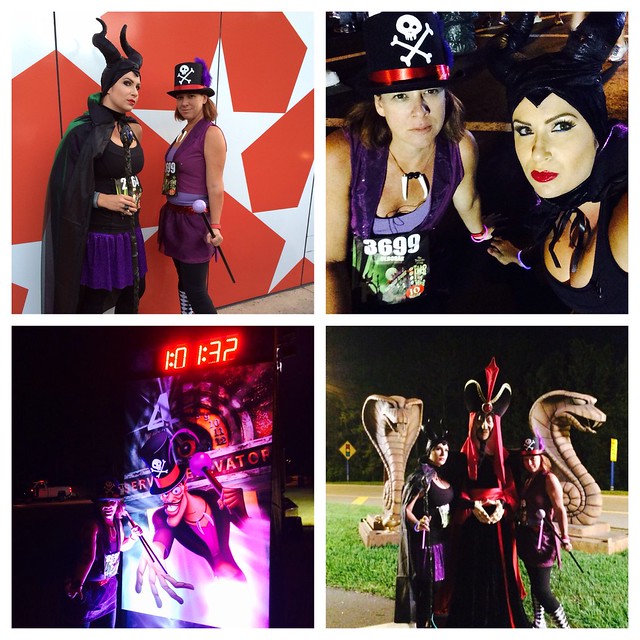 My stomach started feeling not so great around mile 8 but I just pushed through it until the end. Lotso was in the park not far from the end. I wish I had stopped for a pic with him but I felt like crap at that point and figured we could get it inside the park afterwards, then I forgot.   Ooops. We ended up running the entire way between the stops (I usually do Galloway intervals) and finished in 2:07. I backed out how much time we spent at the stops and think we were running around an 11mm pace which is fast for me on a run this long (I’m usually around a 12mm pace) so I’m happy with it. Right after the finish they had a photo opp where the photogs were on the ground shooting up so you had the Tower of Terror in the background. It’s cute but I doubt I’d actually pay for it. 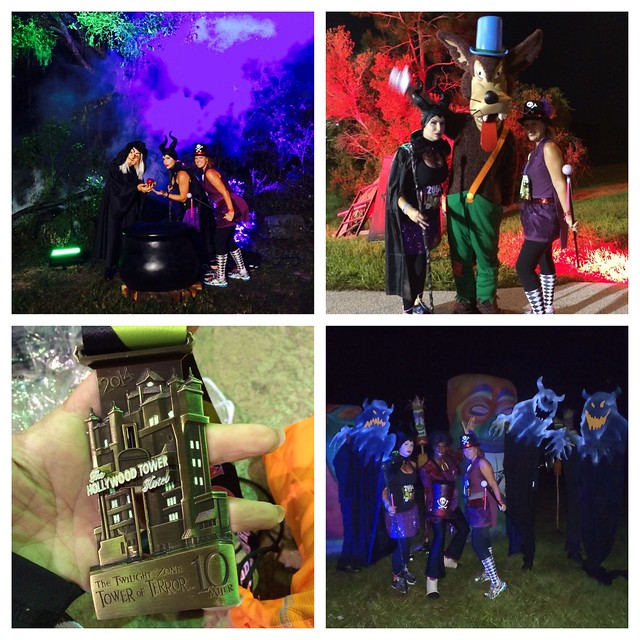 I hit the first bathroom I saw in an attempts to quell my now severe tummy issues. I felt better after but I knew I had at least one more wave of nausea coming. Boo. The bag check was all the way across the park in the Indiana Jones theater so we trudged over there and got the bags. I had brought clothes but decided to stay in the costume for character pics so I just put on my jacket and changed into my flip flops. We sat and rested for about 15 min and then headed out into the park. Pain and Panic were doing a character greet right when we left so we got in line. And that would be where nausea wave #2 hit me. Hell if I was getting out of line or missing the pic though. So I toughed it out then headed straight for the bathroom right next to it to find a line out the door. Boo. So we walked to another bathroom….and then another. Lines out the door for the women on all of them. You see, it seems that 80% of the women changing couldn’t bring themselves to use the changing tent (you know, the one set up for that exact purpose) and instead were using bathrooms. It took me 25 min to get to a stall to go. So that sucked. B went and got beer while I waited in pain. The chick behind me in line looked like she was going to puke so she was worse off that I was. I almost let her go ahead of me but my stomach had other ideas. After that pitstop I got something to eat and chilled out while B went on Tower of Terror (I hate that ride, don’t like drops). By the time she was off I finally felt human again so we hit up Rock N Roller Coaster, got character pics and had beer (they had a lot of mobile bars set up). Mmmmm…

The characters we saw out at the party were Pain/Panic, Darth Vader & Stormtroopers, Boba Fett, Cruella, Evil Queen, Gaston and Shan Yu. We got photos with all but Gaston. Maleficent was supposed to be there but apparently she had an emergency and didn’t make it. B was disappointed since she wanted a pic with her in the costume. The cast member actually took her name/address so they could send her something special. Nothing yet but we’ll see if they do send anything. The party ended at 3:30 and we were still in line for Cruella. They let everyone go thru the line even though it was after closing so that was nice of them. We got back to the room, showered and got to bed around 4:30. And then had to get up 3 hours later to catch the Magical Express to the airport. Side note, am I the only one that keeps wanting the call the bus the Magical Mystery Tour? Yes? Oh well. Another note about the bus, make sure you bring the paper confirmation they deliver to your room, the MagicBands only work for it a the airport. Guess who didn’t realize that? Oops again.

Shortly after this trip RunDisney announced that this run was “suspended” for next year. I hope they do bring it back or change it to a Villains themed half, I really liked seeing them all at one thing. And here is a suggestion to anyone thinking about a Disney night run (this in the future if it comes back or Wine & Dine), don’t leave on Sunday morning. It sucked balls. Big time. We’re leaving on Monday evening for Wine & Dine and I think that will be much more enjoyable. This trip was short and it seriously felt like it was Land-Expo-Maelstrom-Mine Train-Run-Leave. Can’t wait to be back in the parks just two weeks from right now!! 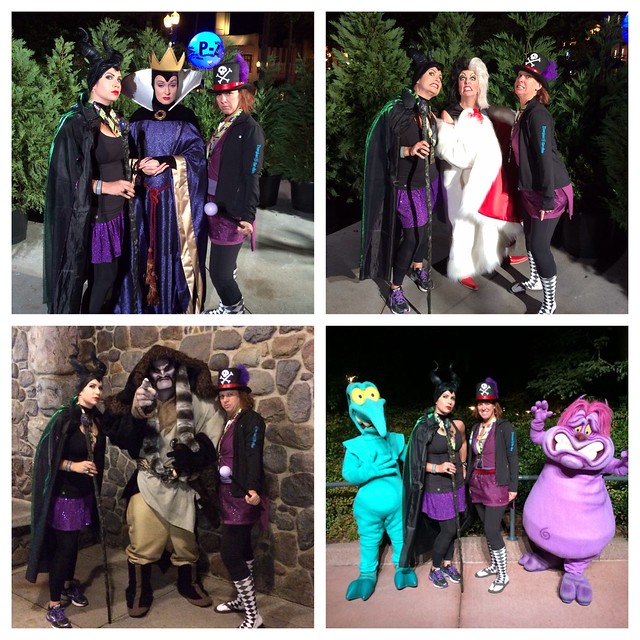 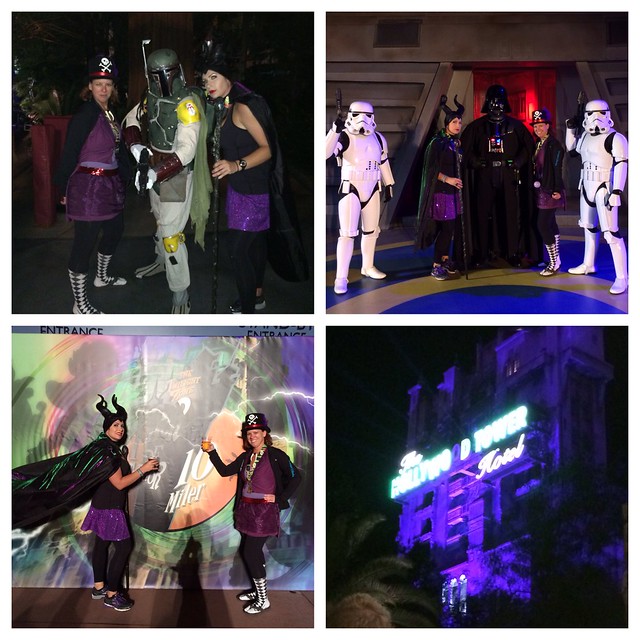