My trip to WDW for the Tower of Terror 10-Miler was my first experience with MagicBands and FP+.   I was tweaking some FP+ for the Wine & Dine trip next week and realized I never really shared my thoughts on them.  I had the bands ahead of the trip but since we bought our APs upon arrival I couldn’t really do much with them beforehand.  I should also mention, I’m an OCD planner, my friend B who is doing the runs with me is not at all.  So, she is just set up on mydisneyexperience account and I do all the planning for us both.  It’s a win-win for both of us, we see a lot, she doesn’t have to deal with it and I get the full control I love so much.  Haha.

Going into the trip I didn’t see the upside of the bands and I HATED the fact that FP+ could be booked 60 days out.  Combine that with needing to book dining 180 days out and it was all just so freaking early to plan details.  Plus not having the APs until we got there meant we missed the 60 day window not only for the ToT trip but for Wine & Dine as well.  So I started out Anti-band.  I went to Disneyland the weekend after we got back from the ToT trip (gotta put that Premier pass to work!) and found myself wishing they had the MB system them, so I guess I was a convert pretty quick.

I will say that it takes some practice figuring out how to use the system for FP+ and planning efficiently and I certainly missed some opportunities last time.  I think it wouldn’t be as easy in the parks if you don’t have a smartphone to use the app on.  But here are my thoughts on the uses for the MagicBands.  And the parks had free Wi-Fi now, although it dropped a lot, especially during the rides and then didn’t reconnect automatically too well.

1.  Hotel Room Key – This was awesome.  Just wave the band by the doorknob and you’re in, it was so nice not having to dig out the keycard everytime.  Especially when just running to the foodcourt for drink refills or when you have a bunch of stuff in your hands.  With kids and a stroller I can only imagine this would be an even bigger help.

2.  Park Tickets – Again, nice not to have to dig out another card to show, but I don’t feel like it’s really any faster to get in yet.  Each station has 4 MB readers and they take up about how much space a turnstile did.  So 4 to 1 should be faster, right?  I think it will be but a lot of people still don’t understand what to do the first time thru and it slows everything down.

3. Charging Stuff to the Room – Awesome again, for me at least.  My card was on the hotel room so anything charged on the band went to it.  You create a pincode to use in conjunction with the band to make purchases so nobody can just buy stuff if you lose the band.  Unfortunately both bands on the room were linked to my card, so B had to still pay with her card for her stuff.  I did some research and it appears you can link bands to different cards so we’ll be trying that for Wine & Dine.  We have 3 people in the room for Dopey and will want 3 different cards so I really hope it works and is easy.  But they need to get to the point of being able to link different cards on the website before the trip though since the lines at the front desk are always so long.  I guess families are the biggest customers and they wouldn’t have this need as much though.

4.  FP+ – The upside was that even that night before I could easily get FP for everything except the holy grail items of Anna/Elsa and 7DMT.  We didn’t go to the Studios during normal park hours last time so not sure if I could have gotten a Toy Story Mania FP either.  But other than those you can get most without much planning ahead.  Some parks have tiers which suck as you can only choose one item from the top tier and most of the stuff in the second tier didn’t seem to need a FP anyway.  Seriously, when was the last time you saw a long line for Spaceship Earth, Imagination or Living with the Land?  My big miss last time was that we ended up going on the Seas ride well before our FP because there was no line anwyay.  I should have immediately afterwards gone to the app and updated the FP+ to try to get another one for Maelstrom while it was still early in the day. But the time I went to the kiosks later in the day after all the FP+ there were no more Maelstrom times available (there had been a ton the night before).  So, definitely watch the wait times and use the app.  I use the Touring Plans App for wait times.  If you can’t get a FP+ for a specific attraction, keep checking and try to just “change experience” on one of your FP+ to see if one pops up.  I was just able to get some for 7DMT on next Friday yesterday morning and had been checking daily since booking them for Wine & Dine right after I got back from T0T.  Also, score another point for not having to dig out a paper FP ticket, just wave the band at the Mickey head in the line and go.  Once you use your three FP+ you can add more if avaialble, but can only do it at the kiosks in the parks, which is a pain.  You should be able to do it via the app so you don’t waste time trekking to the kiosks.  Another thing I don’t like is that you can’t make your 3 FP+ at multiple parks.  For example, if I plan to hit Studios in the morning then go to MK, it would be nice to pick up an early FP for RNR in Studios, then the other 2 for the afternoon in MK.  I park hop a lot so that really bugged me that I couldn’t do it.

5.  Ride Photos – They now automatically link all ride photos to your mydisneyexperience account via the MBs and leave them there for 45 days.  I just looked and my pics from the ToT trip are there.  Cool!  I’m a “make stupid poses and take a pic of the pic” type of person so love that you can see them later.  No more getting blocked by someone else doing the same thing in the post-ride viewing area.  I am particularly looking forward to this feature for my post-run medal flash poses on the rides at W&D and Dopey!

6.  Not really a MB feature in and of itself is the app itinerary.  It will show you not only your FP+ rides/times, but also your dining reservations.  You can also add shows/parades/fireworks times so that you see them with your FP+ to remind you of the time.  Note taht the FP lunch reservations for Be Our Guest don’t show up in your itinerary, so make a note or screenshot the confirmation number so you have it on you just in case you need it (we didn’t when we went).  This is what your daily itinerary looks like (see, now you can all stalk me at Wine & Dine, haha): 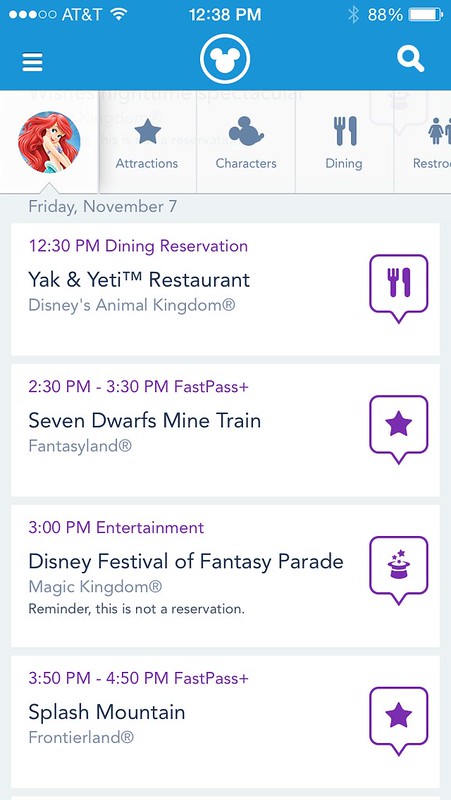 So, overall I really, really liked them.  I’m not a person who worries about Big Brother.  Hell, if they can tailor my offers to my activities I’m all for it.  I don’t think the system was necessarily work the billions they spent on it but the marketing manager in me can certainly see the massive amount of marketing potential surrounding them.  I actually think it would be awesome to work on marketing strategies using them (Yo Disney, feel free to give me a call!).  I’m still impressed with how pin-pointed in location they can get with them.  They were comfotable to wear and since I don’t wear a watch anymore it didn’t feel like too much on my wrist.  It did, however, make me constantly try to check the time by looking at the MB.  My brain just felt something on my wrist and thought “watch”.  So heads up to Disney Merch, make a cheap little digital clock band to slide on them and you’d make a fortune.  And lastly, the little Mickey head that turns green is cute.

What do you guys think of the MagicBand system?