I’m leaving on a jet plane on a redeye tonight to the House of Mouse to do the Wine & Dine Half on Saturday.  This will be my third Run Disney event of the year (Tinker Bell and Tower of Terror were the others) and I’ll be getting my 2014 Coast to Coast medal.  For this run I decided to dress up as everyone’s favorite purple dragon – FIGMENT!  I loved Figment since I was a kid and my stuffed Figment from back in the day kept me company while I made the outfit.  For those of you who may not be familiar with Figment, he is a character from the Journey into Imagination ride.  When the ride was redone to go thru the Imagination Institute Figment was originally left out and then added back in when people complained.  When Epcot opened there were no Disney characters (from films or the fab 5) there so Figment was really the only character in the park. 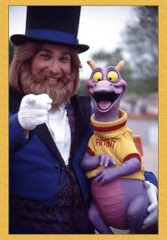 And here is my costume.  Well, the majority of my costume anyway.  I will also be wearing purple compression socks and purple arm warmers: 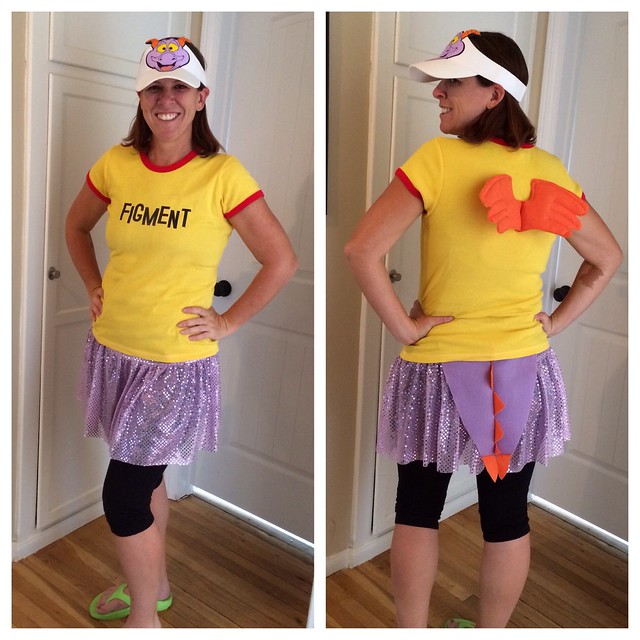 For the costume I found the visor on Ebay (it was park merch that was retired).  I made the sparkle skirt using the tutorial I found on Pinterest (there is a link in one of my previous blog posts).  I had to buy the fabric online as I couldn’t find light purple in any stores around here.  Remember if you making a skirt with the Confetti Dot fabric to sew thru strips of wax paper to prevent the sewing machine needle from getting gummed up and jammed.  I couldn’t find a yellow/red tee so I bought a white tee with red trim and dyed it yellow.  Then did the name with an iron-on transfer.  Last pieces were the tail and wings, which were both made out of felt.  The wings also have a layer of batting between the two pieces of felt to give them more structure.  The tail was sewn with a loop/pocket on the top and I just threaded my race belt thru to make it easy to attach.

I love this costume and am now just praying for no rain during the run!  What is everyone dressing up as for W&D?