Happy Thanksgiving!  The holiday weekend marked the first of 2 Dopey Simulation weekends on the Galloway plan.  Those 2 simulation weekends are also the last two long run weekends – the light at the end of the tunnel!  Crap, am I ready for the long runs to be done.  Have I mentioned lately how much I hate running?  The plan called for the simulation to run Thurs-Sun, but I’m going to see Wicked today (yay!) so moved everything up a day so I could finish yesterday (Sat).  My plan was to run this simulation like I was planning to do the actual event.  Right now that plan is to walk the 5K and 10K, run/walk the half, run/walk the full up to somewhere between miles 14-18, then walk the rest.  I think I mentioned in a previous post that B was injured, she’s got a torn ACL.  She’s much faster than me, so has better corral placement and is usually 2 corrals ahead of me, while my brother is 1 behind me.  She’s dropped back to start with me on the last two runs.  I told her for Dopey she should start in her own corral and I’ll drop back to start with my bro, then she can just walk from the start until my bro & I catch up with her running our intervals.  I figure she’ll be able to put away at least 3-5 miles before we catch her (assuming bro & I stop for character pics and she doesn’t).  Point of that being I even mimicked that and character pictures in my simulation weekend.  Haha, I’m hardcore.

Day 1:  3 miles.  I was planning to walk this entire thing, but had an 8am meeting at work.  I was sure it was going to be cancelled but it wasn’t.  So I just ran the entire thing to finish quickly so I could make the meeting.  Got there at 8am on the dot.

Day 2 (Thanksgiving):  4 miles.  I ran straight thru the first 1.5 miles to simulate catching up with B (I’m guessing she’ll only be 1 corral ahead at most for the 10K) then walked the rest.  Every 1/2 mile or so I’d run about 6-7 house lengths to simulate running to get into picture lines. 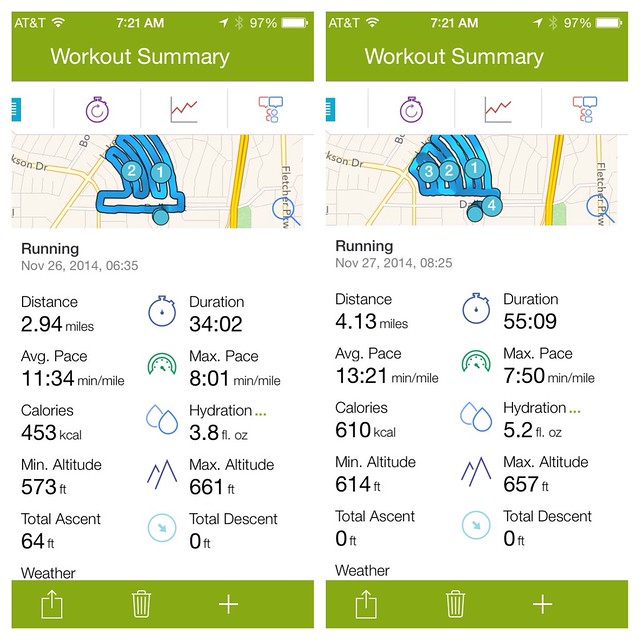 Day 3:  10 miles.  I ran 2-1 intervals, then walked thru a couple sets of intervals after mile 5 to simulate catching B and checking in with her.  I then went back to the intervals until mile 8.5 and walked the last two.

Day 4 Eve:  My SIL had given me a few strips of KT tape so I could try taping my foot to help with the PF pain.  So I taped it up the night before.  As you can see, Max was amazed… 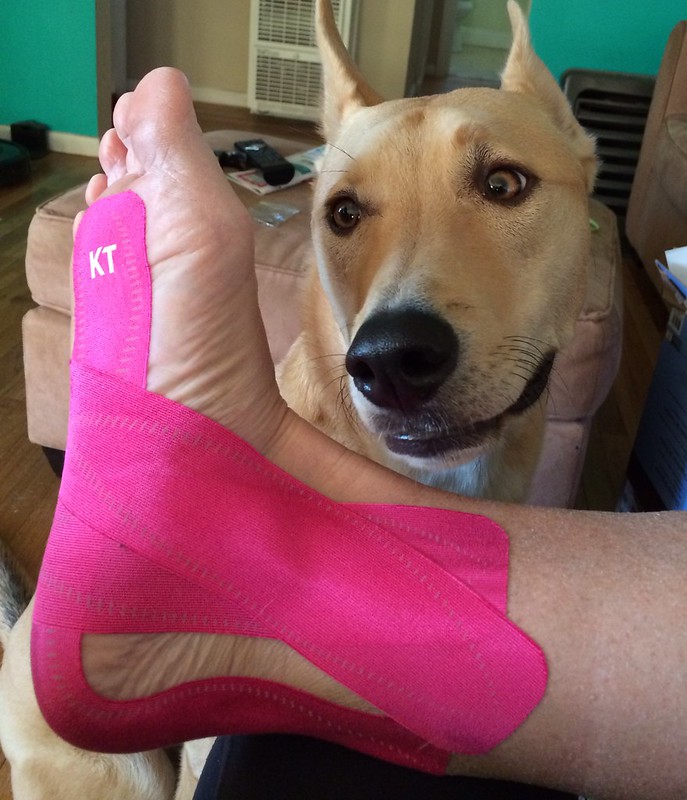 Day 4:  22 miles.  Well, 22 miles was my plan anyway, I ended up with 21 miles.  I stuck with the 4-1 intervals I’ve been using for the longer runs again.  Had some tummy issues shortly after starting and did a pitstop when I got to the lake.  I left Endomondo running the entire time figuring any stops I had to make could just simulation character pictures (I’m still praying no physical issues during the actual races).  I actually started taking a probiotic a few weeks ago and that has helped with the stomach issues a lot.  But you need to store them in the fridge and I keep forgetting to take them.  Doh!  Anyway, felt not so great at that first stop but recovered and felt strong after that.  Until mile 11 where I had another bout of tummy issues resulting in another pitstop.  Felt fine after that until about mile 14ish.  Sound familiar?  I realized that it’s always around mile 14ish when things get hard.  My PF starts to hurt and my feet start to swell.  I pushed thru it until mile 17, then walked the rest.  By the time I started walking not only did my PF hurt, but the bunion on the other foot hurt, along with the standard bottom of my feet pain.  It wasn’t pleasant.  I realized I was sitting at a 13mm pace before it all went to hell after mile 14. 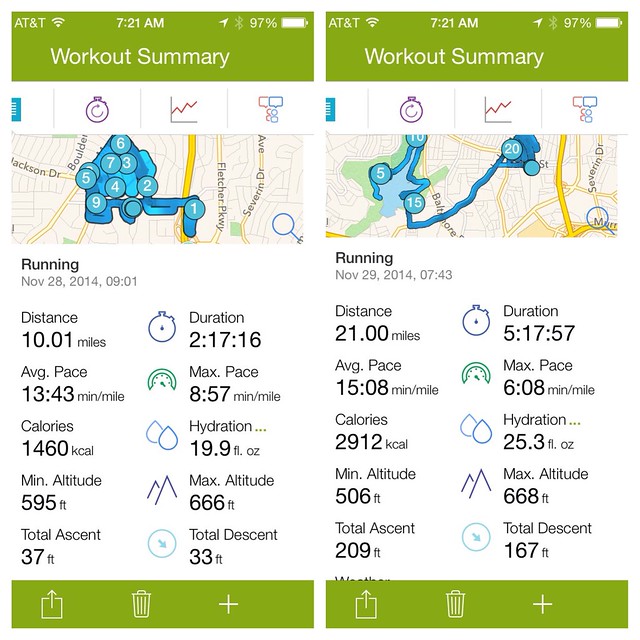 So, here was my takeaway from this run.  As much as I want to be able to maintain the 4-1 intervals, I can’t.  It’s too much running for my jacked up feet.  I have no problems with the interval for a half, they actually leave me feeling strong for a half.  But the full is just too long at that ratio.  I was already planning on dropping to a 3-1 interval for the actual marathon (so it seems easier than the training), but now I’m going to switch to that for the last simulation weekend and see what that does.  I’m also seriously considering doing the marathon at a 2-1.  We’ll see how the 3-1 intervals feel in the later miles.  If it only gets me another mile or two before the pain sets in, I’ll probably just suffer thru the marathon so I can at least cover the first half faster.  But if dropping to 3-1 leaves me pain free for the entire 20 mile run I’d consider doing the 2-1 in hopes I could feel good the entire 26.2.