I know I still haven’t posted anything about Wine & Dine yet, I’ll get to it eventually.  Spoiler alert: it was wet and cold.  Seems like everytime I’ve tried to jump on here to write a post the last few weeks it crashes so I give up.  Anyway, thought I’d do a catch up on my Dopey training first.  Week 19 was actually W&D, so I pushed that long run weekend to the week after and skipped the Week 20 runs per the plan.  Then did week 21 as scheduled and will basically be sticking with the plan for the rest of the time. I will mention that I actually felt great and strong for the W&D half, so that gave me confidence for the Dopey training.  But boy, does running multiple days in a row make a difference for me.  For Week 20 I was supposed to do 2 mid-week runs, then 8.5 Sat and 20 on Sun.  This was the week where the mental aspects of this started to get to me.  I felt like I should be at the point of tapering by the time I hit 20 miles and yet I still had to do 3 more runs.  So, that sucked.  My PF was also killing me between W&D and walking around parks so I skipped the first mid-week run.  I did Sat by myself then went up to do the Sunday mile with my brother, figuring it’d be easier with someone to talk to.  It was easier but I just didn’t have the motivation to push myself at all.  We did the entire 20 miles, but it was more like run the first half and walk the second.  The good news was that even walking that much (and a slow trudging walk at that, my feet were bothering me) we still finished under the pace. 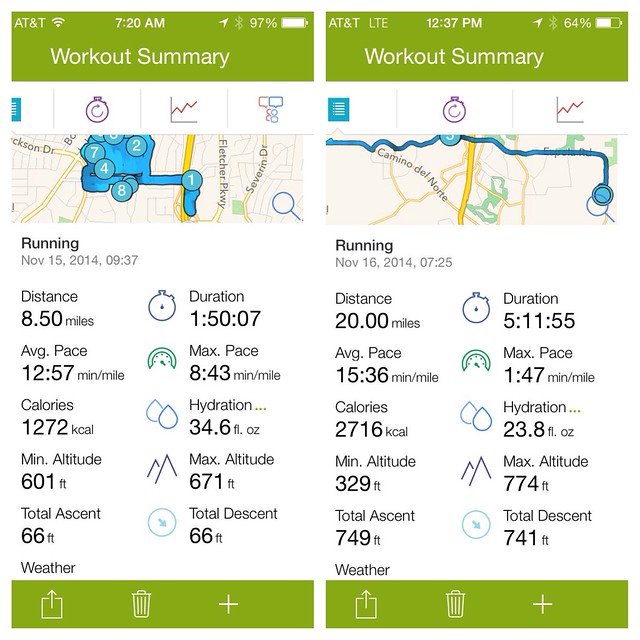 During this run I also decided that I wasn’t going to train up to 26 miles like the Galloway plan calls for.  I’m going to stick to doing 20-22 for the last two runs.  With the PF issues I’m having it’s not worth the pain.  I feel like I’ll have enough miles in even capping the runs at around 20.

Ha!  Just posted this and realized I totally forget to talk about Week 21.  That’s probably because it wasn’t anything exciting.  Two mid-week runs and 7 miles on the weekend.  I ended up skipping the first mid-week run again.  I’ve found that the PF pain takes 2-3 days to subside after the long weekends and figured being pain-free is more important than 3 miles at this point.