Last week was Week 13 of the Galloway training plan, but I did the long runs from Week 14.  Because I am headed to WDW in 2 days for the Tower of Terror 10-Miler run next weekend!  Woohoo!  It was finally cooler here last weekend, only highs in the low 70s which made it nice to run in.  Saturday’s run was 5.5 miles and I usually completely run anything 6 miles and under.  But I decided to do an interval since I had to run again on Sunday.  Tried a 2:00/:30 ratio and it worked pretty well, but I wasn’t pushing the pace as my body is still not used to, nor enjoying back to back running days.

Sunday was 15 miles.  I was originally going to run with B but she had some child care issues so I was on my own again.  I had major stomach issues again and had to take a pit stop at my house at mile 11, then go back out for the last 4.  Which sucked, let me tell you.  I need to figure out the whole stomach problems/fueling issues.  I guess I just need to try to wait longer after eating before going out.  I realized I’ve never had the problem during actual races, just training runs.  Probably because being in a middle corral pretty much ensures I’ll have a solid 45 minute to an hour to digest before starting to run.  I’m also really hoping I can do the rest of the long runs with either B or my brother (who is now back on schedule for the Galloway Dopey plan).  The mileage of this weekend officially pushed me into the “Why the f*%k did I sign up for Dopey?” territory in the middle of the 15 mile run.  I keep telling myself only a few more painful weekends left to go.  At least I didn’t feel like I was struggling to finish the distance as much this week.  No major aches or pains at least, other than the PF in my right foot.  It was just the stomach issues that threw me off this week.

Last night (Monday) was Max’s first obedience training class and since he is so hyper the trainer told me to make sure I exercise him right before the classes.  So even though running was the last thing I wanted to do yesterday I sprinted 1.5 miles with Max before class.  I don’t know if it wore him out but I was toast after it.  Haha.  I may just call that my Monday workout and take it easy this week before ToT.  And if anybody cares, Max did really well in the class, even listened so well he got a cheeseburger as a reward for dinner on the way home. 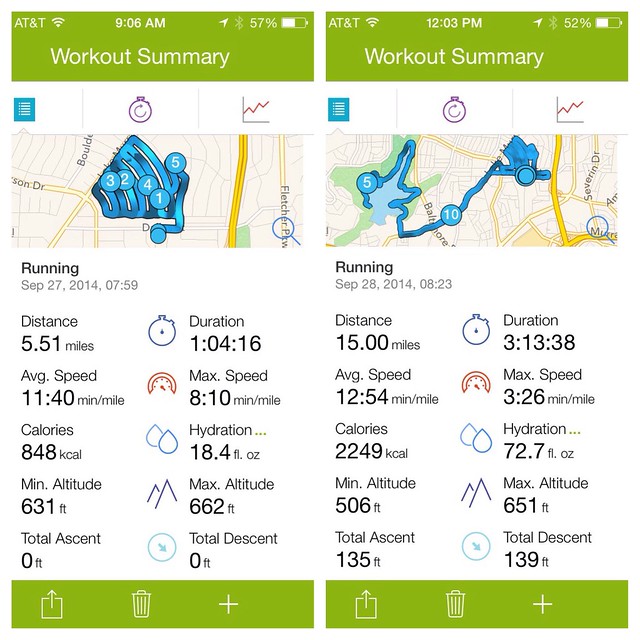 I bought my house about 4 years ago now and my project to do list is still extremely long.  It always grows, I do one thing and it makes something else look like crap, so then the something else goes on the list – it’s a never ending process.  I’m relatively handy so try to do as much as I can myself.  It was way too hot to do any outdoor projects this weekend so I did a quick one inside instead.

The guy who owned the house before me did a lot of work himself and fancied himself quite the handyman.  The materials he used were all good, the execution, not so much.  This project was a prime example, the whole house has nice double-paned Pella windows. But he did the drywall patching/taping/mudding around the windows himself and it sucks.  You can see the tape thru the mud, it’s uneven and just crappy.  Thankfully you don’t really notice it unless you are up close so I generally just ignore it, but couldn’t on the front window anymore.  You see, Max loves to look out the window and him constantly putting his paws up there just pulled away the drywall tape and was destroying the wall.  Due more to sucky old homeowner than doggie, well OK, the dirtiness was Max’s grimy little paws, but the wall issues all old homeowner. 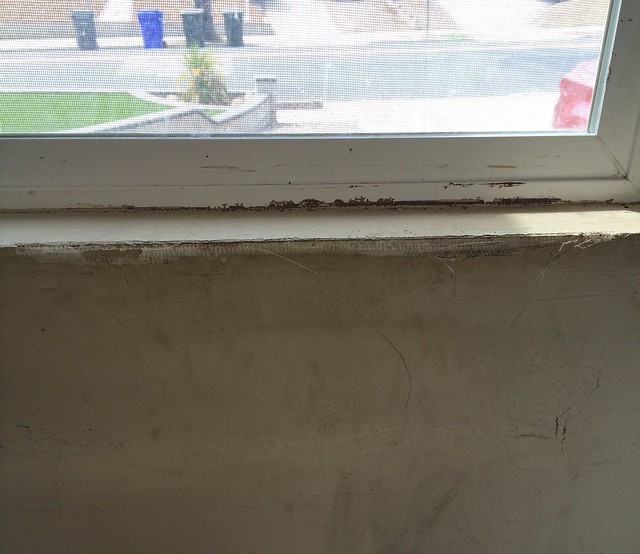 So I decided to make a window sill.  I had leftover molding from when I had my new doors installed last year so used that for the apron.  I was originally going to get good wood for the sill, but the good stuff was $3 a linear foot and the cheapo boards were $4 for a 6′ board.  The cheaper stuff had more knots, but I just went thru all of the boards until I found a good one with limited markings.  I made a template out of cardboards to measure everything before I cut the boards. 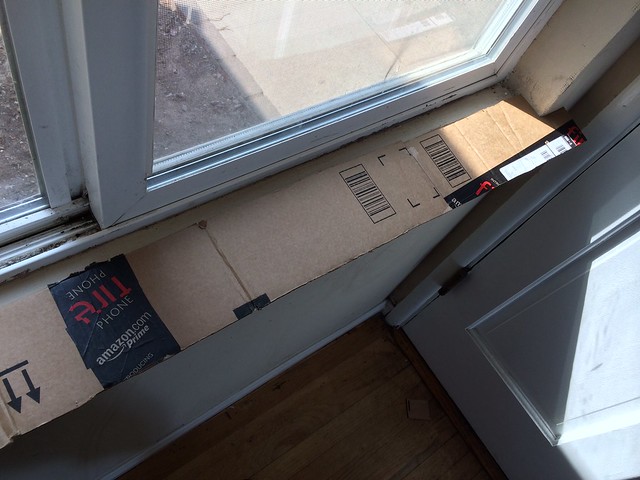 I used a circular saw and a jigsaw for cutting the wood on this project.  The circular saw was just to do the quick straight cuts on the apron molding and to cut the board to length.  Then used the jigsaw to cut out the corners on the sill.  I’m not great with the jigsaw, so my lines on one side are a little wonky, but I figure a little caulking will solve that issue. 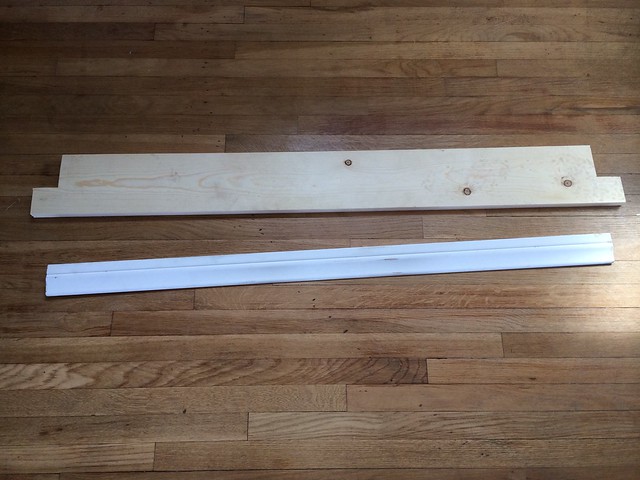 I painted the two pieces with high gloss white paint I had leftover from my door trim before installing it.  Then I just used a nail gun (seriously probably my fav power tool) to nail the board in and the apron below it.  Now I had actually also purchased construction adhesive (liquid nails) to glue the board down before nailing it.  But then I finished it all turned around and saw it still sitting unopened on the counter.  So I dropped an F bomb, contemplated for a moment, then decided to hope the nails alone are enough (I think they will be).  After it was installed you can just touch up where the nails are with putty/paint (honestly I just used paint on this).  Overall I’m happy with it, but I think I’d make the apron piece a little longer if I did it again.

Finished project (with bonus pretty sunset thru the window!): 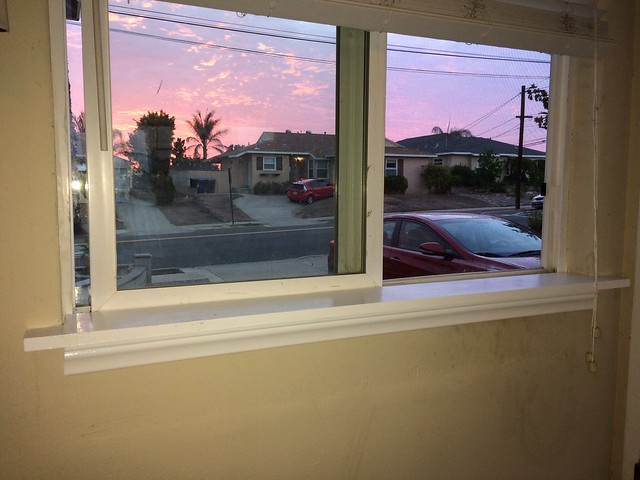 Today marks the 4 month anniversary of me adopting the adorable Mr. Max Rebo. I got him thru a rescue organization who saved him from a high kill shelter out in desert. I thought I’d honor the day by reliving all of the things Max has chewed up that he wasn’t supposed to, so here we go:

In Max’s defense he is barely over a year old, so is really still a puppy, and he’ll be going to training classes starting in a couple weeks. Even with these transgressions he is truly an awesome dog, I really won the doggie lottery rescuing him. Can’t imagine my days without him now. 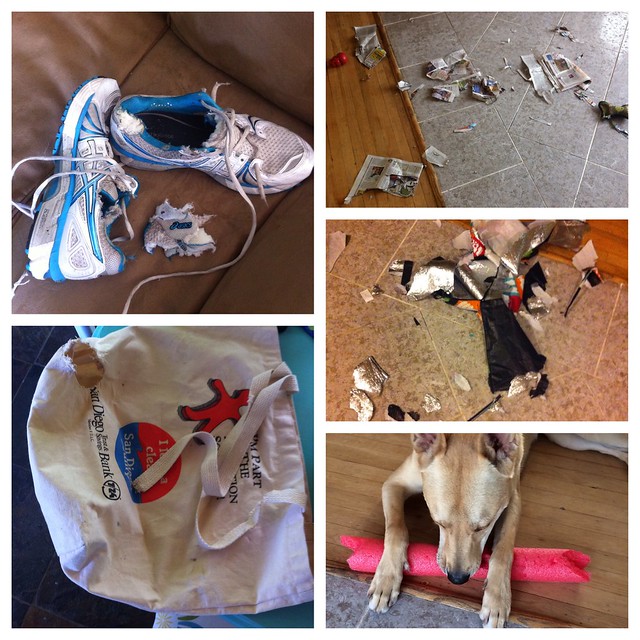 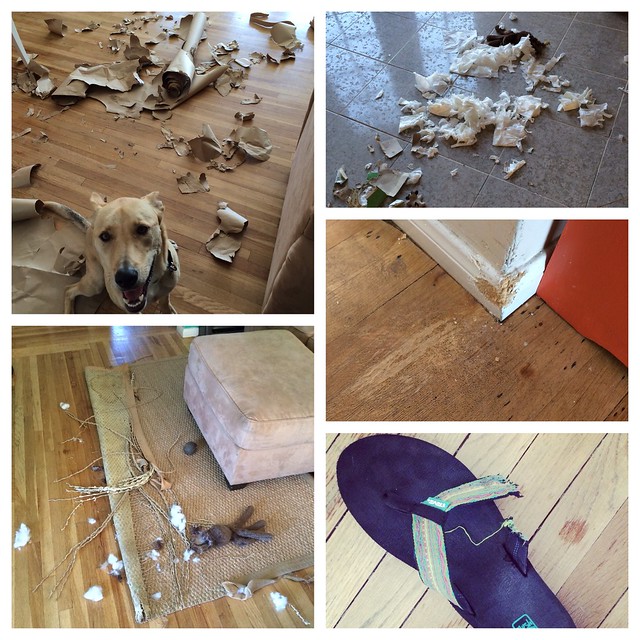